From Birding Wiki
Jump to navigation Jump to search

The American Wigeon (Mareca americana), is a medium-sized species of dabbling duck found in North America. 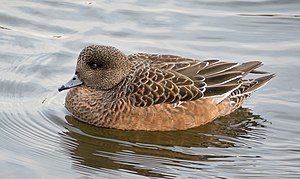 These ducks are common on small "cattle ponds" throughout the Great Plains and will use managed moist-soil wetlands and impoundments, playas, and agricultural areas during migration and winter periods. American Wigeons seek to feed on submersed aquatic vegetation, but they can also be seen waddling on land grazing on turf grass and other low-growing vegetation. Many National Wildlife Refuges purposely flood some managed wetlands in early fall for early migrants, such as American Wigeon, to provide food and sanctuary conditions.[1]

The American Wigeon diet consists largely of aquatic plant material. Known for being opportunistic, they will feed in close proximity to diving ducks and swans to steal plant matter those species bring to the surface. Flocks can also sometimes be seen grazing for food on land more often than other duck species. There is an increase in consumption of animal matter, such as snails and water beetles, during breeding season by females preparing for egg laying.[1]